The Miura-Ori fold is a flat-folding technique that greatly reduces and compresses a sheet of paper through a tessellated crease pattern made of repeating parallelograms. Although the fold is fairly advanced and engineered, it is only comprised of alternating mountain and valley folds.
Watch the video below to learn more about the physics of the Miura-Ori fold from Professor Itai Cohen of Cornell University.

Another interest aspect of this fold is that the paper becomes “programmed” and develops a fold memory. This means that as the fold is repeated, the paper will seemingly begin to fold itself by following the fold pattern. Interestingly, the stiffness of the fold can also be programmed by creating “pop-through defects,” in which a point in the tessellation pattern is disrupted and inverted. These pop-through defects prevent the paper from being flat-foldable, and in doing so, give the structure greater stiffness and rigidity. 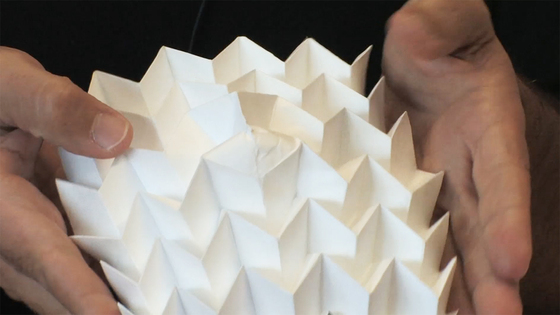 The fold pattern also gives the paper interesting mechanical and material properties. For example, the Miura-Ori fold gives seemingly unremarkable paper greater stiffness, rigidity, compressibility, and contractile ability, known as a negative Poisson’s ratio.
This idea that origami has the potential to give materials new properties has had huge implications within science and engineering, at both the nano and macroscale. Using this technology, researchers have developed prototypes of large solar panel arrays for space satellites, surgical stents, as well as soft, self-deployable robots.

The Miura-ori fold gives materials interesting new properties, such as compressibility, rigidity, and increased structural integrity. A similar pattern is often seen in nature, such as with the Hornbeam leaf, which exhibits a herringbone-like mountain and valley pattern.

One thought on “The Miura-Ori Fold”